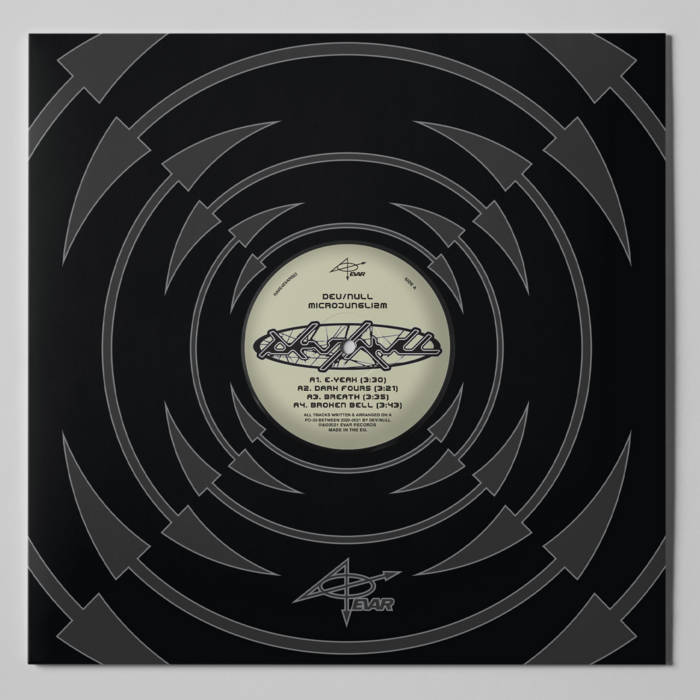 This November, American cult hero Dev/Null debuts on Trickfinger & Aura T-09's Evar Records with MICROJUNGLIZM, an 8-track album that explores the power and beauty of darkcore, jungle tekno and breakbeat rave. Chopped drums, hairpin turns and alluringly emotional pads open up a time portal between the past and the future, decorated with haunting samples and musical Easter eggs that show off Boston-based Dev/Null's deep history as a rave historian and scholar.

MICROJUNGLIZM's fantasy suite was written over the last year, arranged and sequenced entirely without a computer. Dev/Null fell in love with Teenage Engineering's PO-33 Pocket Operator – a portable, pocket-sized sequencer that he started using during his DJ sets to create special versions on the fly. The limitations of making entire tracks inside the PO-33 immediately suggested the sampling techniques and stylistic hallmarks of early jungle, already one of Pete's longtime obsessions.

"The PO-33 has some of the same low-fi sonic charm as retro gear used back in the day," Pete explains. "8-bit samples, 11khz mono sound, kind of like an Amiga computer. It's been really fun and exciting to have my own tracks to throw into sets – even if they're raw, unfinished 3-minute things which get played once and never again. A few of these tunes were done for my sets at parties thrown by Aura T-09 in L.A., so I'm happy they're coming out on her label."

While these tracks may seem maximal, they are minimal to Pete's ear – a departure from the intricately sliced and information-dense breakcore for which he's known. The album emotionally bottles the essence of a bygone era with an individual palette of influences, from UK grime anthems to Italian horror soundtracks. Pete is not merely trying to tap into the cultural zeitgeist for all things jungle and breakbeat rave – he's already been here, stoking the fires of this scene since the early 2000s with his tastemaker blog (Blog to the Old Skool), his cult vinyl reissue label 8205 Recordings, and his deep dive radio shows: Demon Poetry on NTS and BTTO (with new-era jungle torchbearer Tim Reaper) on Jungletrain.net. MICROJUNGLIZM itself follows on from the momentum created by Pocket Selector, Dev/Null's 2020 outing with the PO-33 on the Modern Urban Jazz label, run by veteran UK drum 'n' bass producer Justice.

MICROJUNGLIZM is available NOVEMBER 19th, on Evar Records via digital download and 12" vinyl. Check out these amazing breakbeat meditations from a modern master of the style.